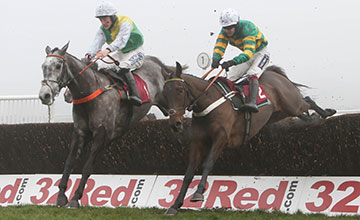 Buveur D’Air has been impressive on both starts over fences

TRAINER Nicky Henderson has said that Buveur D’Air is likely to run in this weekend’s Betfred TV Scilly Isles Novices’ Chase at Sandown, but that after that he could take one of several routes for the rest of the season.

Buveur D’Air has entries in the Arkle, JLT and Champion Hurdle and Henderson told the Racing Post: “He’ll run on Saturday at Sandown, which may tell us more, but I’m not ruling anything in or out. He has the entry in the Champion Hurdle for a reason and I’m very open on this one.”

He added: “Top Notch is going to run in the Scilly Isles as well and is entered in everything at Cheltenham, from the Champion Hurdle down to the Arkle including the JLT. His confidence is sky high and we should probably stay over fences but he has lots of options.”

At the same time, Henderson poured cold water on any suggestion that Arkle favourite Altior could deviate from that path. “Some people have suggested Altior might be considered for the Champion Hurdle now Annie Power is out, and there’s only one answer to that question – no. He isn’t even entered in the race and the Arkle is still very much the plan,” he said.

Altior is a general 4-5 favourite for the Arkle, while Buveur D’Air is 7-1 in places for the JLT, second choice behind Yorkhill. He is a standout 33-1 for the Champion Hurdle with Betfair.

Get Pricewise’s ante-post thoughts on the Arkle, only in Tuesday’s Racing Post or as part of Members’ Club.

Barcelona vs Napoli, Bayern vs Chelsea, UEFA Champions League Live Streaming: When and where to watch