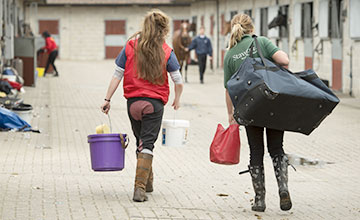 THE Irish Stable Staff Association has expressed its satisfaction after finally agreeing a pay increase for stable staff with the Irish Racehorse Trainers Association.

Expenses for a day meeting will also increase to €50 from €40, while those for an evening fixture will rise to €60 from €50.

ISSA chairman Bernard Caldwell said: “After much negotiation, we have reached an agreement that our members are happy to accept.

“Pay and conditions needed to improve and this was understood by all parties. Our members are often described, and rightly so, as the backbone of the industry, but that needed to be recognised in real terms, which has now happened.”

Caldwell had previously expressed growing concerns that the voice of Irish stable staff was not being heard by trainers.

‘Keeping the show on the road’

However, IRTA chief executive Michael Grassick believes the new pay increase expresses the value that trainers hold their staff in.

He said: “Our members represent a broad community in racing and have to work hard to stay in business in what are still challenging times.

“The stable staff provide a vital service and keep the show on the road, so we are very pleased to have arrived at a workable solution.”