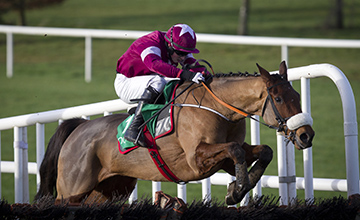 Death Duty: an impressive winner of the Navan Novice Hurdle

DEATH DUTY continued his unbeaten record over hurdles with an authoritative performance at Navan to enhance his claims for Cheltenham glory in March.

The clash between the Gigginstown-owned five-year-old and the Willie Mullins-trained Invitation Only was expected to be a tight tussle, however Death Duty, conceding a 3lb penalty to his rivals for success in the Monksfield Hurdle last month, was not troubled in winning by three and three-quarter lengths from long-time leader Monalee.

Invitation Only travelled behind the leading pair, but had no response as Death Duty kicked for home after the second-last and trailed in third.

Labaik, as he did at Fairyhouse in the Royal Bond, refused to race.

The Gordon Elliott-trained winner has replaced Invitation Only as the favourite for the Neptune Novices’ Hurdle and is now 8-1, while he has tightened his stranglehold at the head of the Albert Bartlett market and is into 4-1 (from 8s).

Elliott said: “He’s a horse we’ve always liked a lot. He’s taken to hurdles really well and we thought he had improved from his win here last month. Bryan [Cooper] said he was more on the bridle today.

“The Grade 1 Lawlor’s Hotel Novice Hurdle over the same trip at Naas on January 8 is the plan.”