Djakadam and Hercules could face off in John Durkan 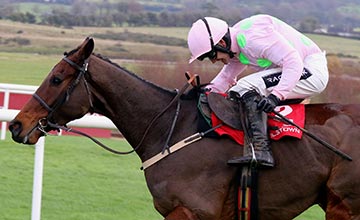 Djakadam: could make his comeback at Punchestown on Sunday

DJAKADAM, runner-up in the last two runnings of the Cheltenham Gold Cup, could face stern opposition from within his own camp in Sunday’s Grade 1 John Durkan Memorial Chase at Punchestown.

Beaten only by Don Cossack and Coneygree at the past two Cheltenham Festivals, Djakadam is one of four Willie Mullins-trained entries for the prestigious staying chase which he landed on his seasonal reappearance last year.

Racing Post Arkle winner Douvan has also been given an entry in the 2m4f chase but at this stage looks more likely to head to Cork on the same afternoon for the Grade 2 Kerry Group Hilly Way Chase, but JLT Novices’ Chase hero Black Hercules and recent Clonmel Oli Chase winner Alelchi Inois are also in the mix.

“We won’t finalise plans until later in the week but Djakadam won the race last year and is in good shape and I would be hoping for a real good run if he was to run in the race,” said Mullins on Tuesday.

He added: “Black Hercules could also make his first start of the season, he’s in good form. Douvan and Alelchi Inois have also been left in at this stage.”

Muddying the water further, Alelchi Inois holds an entry over hurdles at Clonmel on Thursday and in Friday’s Glenfarclas Cross Country Handicap Chase at Cheltenham, while Black Hercules, so impressive at Cheltenham in March, also has the Hilly Way as an alternative.

The sole British entry among a possible field of 13 is the Kerry Lee-trained Kylemore Lough, the winner of five of his last six races and beaten only head on his Grade 2 comeback at Ascot last month.