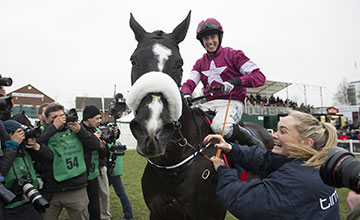 Quoted on his Betfair blog, Elliott said: “We found that he had a bit of heat in his leg yesterday [Tuesday] and we’ve made the decision to call time.

“It’s a real sickener for Gigginstown [owners], myself, Bryan Cooper and the whole yard. We knew it was never certain we would get him back to the racecourse – and even after that to get him back to his best – but we were hopeful and he was on track for a run at Gowran Park next month.

“He’s a horse of a lifetime and he owes us nothing. I said all season that if he had any sort of setback at all we would not abuse him and retire him straight away.”

Eddie O’Leary, racing manager for owners Gigginstown House Stud, said: “It is a recurrence of the very same injury, the exact same injury in the exact same place. I wouldn’t mind, but I saw him last week and his legs were like steel and we thought we had him back.

“We said all of the way along that we were very pessimistic and this is exactly why. He was a wonderful, wonderful horse for us. You could pin fire this horse and get him back but he owes us nothing and we will give him the retirement that he richly deserves at Gigginstown House Stud.”

Gigginstown’s Michael O’Leary was keen to praise the role Elliott and his team had in overseeing Don Cossack’s rise to the top. He said: “Anita, Eddie and I would like to sincerely thank Gordon, Karen, Louise and all the team at Cullentra House for the outstanding job they did in managing Don Cossack’s career, to ultimately win the 2016 Cheltenham Gold Cup.

“Gordon left no stone unturned to help Don Cossack return to defend his title but alas it is not to be. At the age of ten we are all agreed that the best thing for ‘the Don’ is a well-earned and very well pampered retirement in Gigginstown.”

With Don Cossack now retired, this year’s Gold Cup is unlikely to feature either of the last two winners as connections of Coneygree revealed earlier in the week that they will not enter the 2015 winner.

With another potential rival falling by the wayside, bookmakers cut Gold Cup favourite Thistlecrack, with William Hill going 8-11 (from 4-5), a move that was mirrored by Ladbrokes.

Don Cossack’s first experience of Cheltenham was not a favourable one, as he fell when well positioned in the RSA Chase in 2014.

He returned to the track the following year off the back of a four-race winning streak, and this time finished third in the Ryanair behind Uxizandre.

But that defeat proved to be one of Don Cossack’s last reverses, as he then won six of his next seven starts, including the Punchestown Gold Cup and JNwine.com Champion Chase.

His final start, however, proved a fitting culmination to a fantastic career as he took the Gold Cup by four and a half lengths from Djakadam.

Previous PostFootball in Summer Olympics 2016 at Rio Next PostBarcelona must use common sense over Lionel Messi contract: CEO Oscar Grau